Company B Client in the News: Sherry Orel of Brand Connections, Make Sure Your Marathon Pitch Makes It to the Finish Line, Not the Trash Bin, AdAge

Once again, Sherry Orel, CEO of Brand Connections, brings her expertise in product sampling and brand sponsorships to the readers of AdAge.

Just in time for the NYC marathon, she explains how to create race sponsorships that really get attention. Sherry’s writing is smart, insightful and just plain fun to read.

Read this article in the “CMO Strategy” section of AdAge and let me know what you think.

Company B Client in the News: Sherry Orel of Brand Connections, Get Inside a Customer’s Mind at the Moment Your Message Appears, AdAge

With over 20 years of marketing experience, Brand Connections’ President, Sherry Orel, knows a thing or two about brand messaging.  She also know the most effective approach to delivering a brand’s message requires more than clever copy and creative; it’s about timing too.

It’s no wonder she captured the editor’s attention at AdAge; her smart take on dwell-time media is not only insightful, but lively too.

Read this article in the “CMO Strategy” section of AdAge. 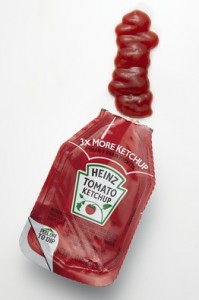 To revolutionize something, you need to think creatively, solve a real problem and approach the solution from a different perspective than before.

That’s exactly what Company B and KalvinPR client, 4sight, did when redesigning a new ketchup packet for Heinz. Their new packet design solves the 40 year old problem — ketchup packets spurt.

The news first appeared in The Wall Street Journal and was subsequently picked up by many other other national news outlets.

Read the article, which appeared on the front page of the Marketplace section of The Wall Street Journal and watch the story from CBS below.

As more and more brands  align themselves with causes, it’s important to do it right.  To achieve success, brands need to do more than simply place a logo on a package or ad.

Sherry Orel, CEO of Brand Connections, explains how companies should be taking social media, mobile and digital consumer behavior into consideration in their cause-marketing strategies.

Read this article in the “Causes” section of Media Post.  Do you agree with her insights?